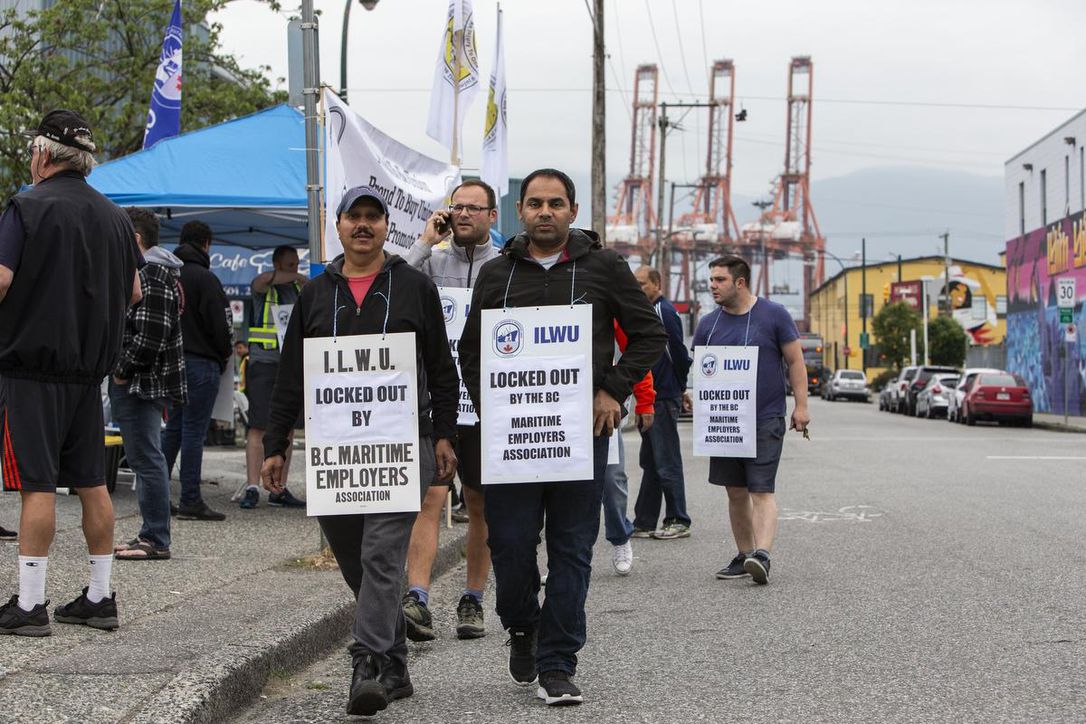 VANCOUVER—It lasted only the blink of an eye: B.C.’s flirtation with a nationwide shipping crisis came to an abrupt end Thursday morning with a tentative deal between workers and employers at the province’s ports..

After a flurry of activity that included all-night negotiations and a visit from federal Labour Minister Patty Hajdu on Wednesday, the union representing port workers and the association representing their employers found common ground mid-morning Thursday.

The BC Maritime Employers Association subsequently lifted the lockout that had kicked in at 8 a.m. Thursday, and the International Longshore and Warehouse Union Canada withdrew its strike notice.

“I’m happy to report that we’re back in business,” Ashton said.

Shortly before 10:30 a.m., port workers packed up their signs and took down union flags that had been erected to start the day. The ports were scheduled to open at 4:30 p.m. Thursday, in time for the evening shift.

The BC Maritime Employers Association had issued the lockout notice at Vancouver’s port after negotiations broke down earlier in the week — reportedly over automation issues.

— and the union launched “limited and targeted” job action at the Deltaport and Vanterm terminals on Monday.

The union didn’t give details on the job action entailed, but did say it included a ban on overtime.

It was enough, the BCMEA said Tuesday, to make work at the terminals inefficient and unsafe.

“We felt through a series of events with escalating job action Monday that we were left with no other option than to issue the lockout notice,” BCMEA chair Jeff Scott said after the tentative deal had been reached.

He had hoped to reach an agreement before the lockout began.

“Our primary focus was to remain at the bargaining table to get a fair and equitable agreement,” he said.

Both the union and the employers’ association credited Hajdu for helping move the negotiations along.

“She came out and she basically told us, ‘Get to work, it’s time to buckle down,’” Ashton said. ‘Yes it’s about your union, it’s about the employers’ association, but it’s also about the rest of Canada.’ And she sent us a strong message.”

The two sides started to get closer to a deal as dawn approached, Ashton said. They will not release details of the deal until the employers and union members ratify it, which is expected in the next couple weeks.

Container traffic through the ports of Vancouver and Prince Rupert alone account for roughly 67 per cent of the country’s total, said Greg Wilson, director of government relations for the Retail Council of Canada.

The collective agreement, which expired in March 2018, contained provisions to protect workers in the event of displacement by automation, including retraining for alternative work opportunities and voluntary early retirement plans.

It also allowed the employer to require employees to retire at 62, as long as the employee was fully covered by a supplementary pension plan.

A lockout could have meant significant wage losses for affected workers. The expired agreement, which was signed in 2010, set hourly wages for 2017 at between $42 per hour for a typical daytime shift to $84 per hour for a holiday shift. That means locked-out employees could have lost more than $300 a day.

Workers picketing Thursday weren’t authorized to speak to the media. Several workers said they got calls around 6 a.m. from union leaders who told them it didn’t look like a resolution was going to be reached by 8 a.m., and asked them to get ready to form a picket line.